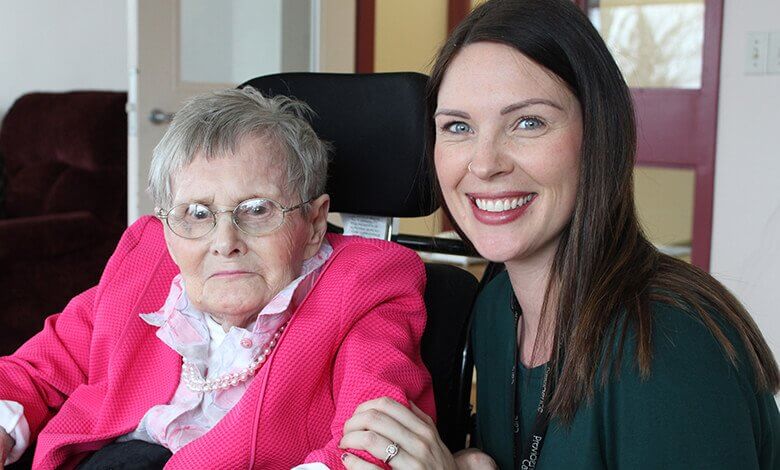 Doreen Lewis and Kelsey Melrose, a Recreationist on the Recreation and Life Enrichment Team at Providence Manor

More than four decades ago, Doreen Lewis was a fearless woman on a dangerous mission. At least that’s what the Ottawa Citizen’s headline writers had to say, back in 1976, about the “farmer’s wife” and her attempt to “break the male grip” on municipal politics and “smash” her way in.

She may not have won the election, but she taught her family how to take a stand. “Mom was tired of all those old boys making back-room deals,” say her children – Polly, Jane, Danny and Kelly – of their  mother’s brave bid for a seat at the council table in North Crosby Township near Westport.

Today as a resident of Providence Manor, Doreen Lewis’ mission is very different but no less inspirational or instructional to her family. “When we come to visit, we see the lessons Mom is teaching us, and the staff about what it means to have joy and happiness and be able to laugh and be positive.”

Diagnosed with dementia in 2011, Doreen Lewis moved to her new home in Providence Manor in September 2014. The once avid public speaker is still very much in command of her legendary sense of humour. “Mom is funny” her children say and she has used her “smarty-pants” wit to establish lasting bonds with the staff. The Recreation and Life Enrichment Team, in particular, understand her and help her make the best of every day.

Providence Manor has become a centre of excellence for life enrichment, offering the home’s 243 residents a recreational care environment that supports whole-person wellbeing, and includes programs and activities that are among the most creative and resident-centred that can be found in long-term care today.

Danielle Preston, Coordinator Recreation and Volunteer Services, says the key to her “small but mighty” team’s success is their focus on building meaningful relationships. “It is the relationship that motivates the resident to overcome their reluctance, helping them get the most out of each day.”

Kelsey Melrose, one of the team’s four full-time Recreationists, has become part of Doreen’s extended family and agrees that trust is critical.” The more residents trust us, the more likely they are to say, “I know you. You care about me. I’ll try.”

Danielle acknowledges that recreational programs in long-term care can get “stuck in old habits.” Her team avoids this pitfall through a relentless commitment to variety, creativity and experimentation.  “At our monthly meetings, we challenge everyone to come with one new idea. That’s how we keep things fresh.”

Whether they are planning balloon badminton, evening dancing, or a casual round of Mimosa Mondays, with non-alcoholic champagne, they work to tailor programs to meet the ever-changing needs of the residents. “One month baking might be a huge success, if people are able to measure the ingredients,” says Danielle. “But then a couple of months down the line, as a resident’s diagnosis progresses, we might have a baking program where they are just placing pre-made cookies on a baking sheet. Both are just as meaningful.”

When their mother first moved to Providence Manor, Doreens’s children thought “it was the end of the world.” Today, they are grateful for how much their mother is loved on a daily basis. “We can see it, and she feels it, and we know that has helped her to flourish here.”

This article originally appeared in the Kingston University Foundation Summer Report in June 2019.

@MayorPaterson We sure do Mayor Paterson! Thanks for sharing! 5 days ago

Help us show our volunteers a little love. These friendly, masked faces are helping reunite families & friends at Providence Care Hospital while keeping our staff, patients/clients and designated visitors safe. Thank you for all you do! #COVID19 #inthistogether #staysafe #ygk 5 days ago

@RomneyPierog Thank you so much for your very generous donation! Our clients and families are going to love your brightly coloured masks! 5 days ago

@MayorPaterson Thanks Mayor Paterson! 6 days ago

We teamed up with @FACSFLA to make 300 PPE Kits for some of the community's most vulnerable. They feature masks, hand sanitizer, soap & more! A massive thank you to @unitedwaykfla & everyone who donated items! The kits are going out this week. Stay safe everyone! #ygk #COVID19 1 week ago

Superheroes from @EliteWindowC stopped by @KingstonHSC to say hi to patients & staff. If that isn't enough, these superheroes are donating 10% of today's proceeds to @UHKF in support of the pediatric unit. Talk about a feel good Friday! #ygk twitter.com/KingstonHSC/st… 1 week ago

Today we celebrated one of our favourite annual events, Superhero Day. The pandemic has changed a lot about a hospital stay in pediatrics, but superhero day is a unique opportunity to let young patients interact with their favorite heroes from the safety of their room. #ygk pic.twitter.com/6vjqwd5JSU

The wave, bow or how about the namaste? Have you tried any of these greetings? Let us know in the comments below what you're doing in lieu of handshakes, hugs and high fives! #ygk #COVID19 #staysafe twitter.com/WHO/status/128… 2 weeks ago

We all can help stopping #COVID19 from spreading.

Keep at least 1m distance from others.
Here are some alternatives to handshakes, hugs and high fives during the COVID-19 pandemic ⬇️

Which one is your favorite?pic.twitter.com/mNcbACl5Xv

Wearing a mask? Do not wear it hanging from one ear, under your nose/chin or around your neck. Keep yourself and others safe by wearing your mask properly. Click on the image below for more information👇🏼 providencecare.clickthis.top/M6FySY 2 weeks ago

Wise words from our friends at @Sunnybrook! twitter.com/Sunnybrook/sta… 2 weeks ago

Today is #WorldEmojiDay! As always, don’t forget to:

Maintain physical distancing 🧍‍♂️↔️🧍‍♂️with anyone outside of your social ⭕️

Clean your 🖐🖐 often with 🧼&💧or alcohol-based sanitizer

Shout out to the Mandarin in #ygk for donating 300 meals to Providence Manor staff today! The support we've received from our #community during the #COVID19 pandemic is truly overwhelming. Thank you for thinking of us! #locallove 3 weeks ago

Wearing a mask? Make sure you're wearing it properly 👍🏻 Click on the image below to learn some of the common mistakes made when wearing a mask 👇🏻 #ygk @cityofkingston @KingstonPolice @queensu @KingstonHSC @UHKF @unitedwaykfla providencecare.clickablecard.top/qgvGBxc 3 weeks ago

Residents at Providence Manor now have four new Samsung Galaxy tablets to help them stay connected with loved ones during the pandemic thanks to @conquercovid19. Thank you for this incredibly generous donation - our residents will love them! #ConquerCOVID19 #ygk #FridayFeeling 3 weeks ago

Protect yourself and others by wearing your mask/face covering properly. Click on the image below to learn some of the "Do's" and "Don'ts" of wearing a mask/face covering. @cityofkingston @KFLAPH @KingstonPolice @UHKF @KingstonHSC @unitedwaykfla providencecare.clickthis.top/MVvbA 4 weeks ago

Did you know? Every time you cough or sneeze you release small droplets through your mouth & nose. Infectious particles in these droplets can make people sick. Remember to practice proper #respiratoryetiquette and #handhygiene. 4 weeks ago

Are you coming to one of our sites for an appointment or visit? Please note all outpatients and visitors must wear a mask or face covering. Visit providencecare.ca/covid19/ for more information. #ygk 1 month ago

A big #ygk welcome to @janephilpott! We look forward to working alongside you. twitter.com/QueensUHealth/… 1 month ago

We are thrilled to welcome @janephilpott as she begins her roles as Dean, Faculty of Health Sciences, Director, School of Medicine & CEO, @seamokingston. Please join us in welcoming Dr. Jane Philpott to the FHS family!#WeAreFHShttps://t.co/aXmTcRwtEN pic.twitter.com/81YAwBrlqO

Now is the time to get WISE. ow.ly/61tm50Am4K8 #COVID19KFLA Retweeted by Providence Care 1 month ago

Whether you donated or watched the Stream-A-Thon (or both), we appreciate your support! Together, you raised $33,760 for @KingstonHSC & @providence_care! We couldn’t have done this without the generosity of the #IBEWLocal115. Watch the replay of the event: youtu.be/g9h6VdyLCwc Retweeted by Providence Care 1 month ago

ICYMI: The COVID-19 Assessment Centre at the @LeonsCentre will be CLOSED tomorrow (July 1). A temporary assessment centre will operate at St. Lawrence College from 9 a.m. to 12 p.m. twitter.com/KingstonHSC/st… 1 month ago

It's more important than ever to wear your mask properly. Check out the poster below for some "Do's" and "Don'ts" of wearing a mask. #ygk 1 month ago

In case you missed it: the #COVID19 Assessment Centre has re-located to the @LeonsCentre, located at 1 Tragically Hip Way. #ygk twitter.com/KingstonHSC/st… 1 month ago

If you need to be assessed for COVID-19 then please attend the Leon's Centre in downtown Kingston. For location & parking details visit https://t.co/omhETtnV6L #ygk @KFLAPH @cityofkingston pic.twitter.com/JoRfHv61qq

Thank you @KFLAPH for this informative video on how to properly wear and remove a mask. youtu.be/-2pkmEXH-dg 1 month ago

In response to the high demand for COVID-19 testing following the recent community outbreak, a Temporary COVID-19 Assessment Centre will operate at St. Lawrence College on Sunday June 28, 2020 from 9 a.m. to 2 p.m. Retweeted by Providence Care 1 month ago

Face coverings are now mandatory in all commercial settings. Find out what it all means at kflaph.ca/MaskFAQ #COVID19KFLA Retweeted by Providence Care 1 month ago

Reid and Ben: We had such a great time chatting with a bunch of healthcare professionals yesterday during our Stream-A-Thon for @UHKF. You can check it out and still donate HERE #ygk. Big thanks to @KingstonHSC @providence_care @IBEW Local 115 https://t.co/8ftDbbsmQG

We've got an hour to go on our Stream-A-Thon for @UHKF. Help us raise money for @KingstonHSC and @providence_care . You can donate and watch HERE #ygk #ThankYou https://t.co/YseRoUq7iL

Tune in now! Our President and CEO Cathy Szabo is live with @983FLYFM's Reid and Ben for the Stream-A-Thon for @UHKF. Listen in at 10:25 a.m. and 11:25 a.m. to learn more about the Providence Manor Redevelopment Project. Click here to listen: uhkf.akaraisin.com/ui/UHKFStreamA… #ygk #donate 1 month ago

All outpatients and essential visitors coming to the hospital must wear a mask a face covering, even if they do not have any signs of an infection. Click on the image below for more information. providencecare.clickthis.top/bTBA7Gq 1 month ago

Hear from our very own Krystal Mack, Administrator of Providence Manor long-term care home. Krystal talks about the exceptional care our staff provide day in, day out, regardless of #COVID19. #HealthCareChangeMakers twitter.com/HIROCGROUP/sta… 1 month ago

A new mini-series for #HealthcareChangeMakers listeners, just released: From the Frontlines, where frontline healthcare providers & support staff share their stories.🎧

Due to the heat warning issued by KFL&A Public Health, the Memorial Centre COVID-19 Assessment Centre will close today at 2 p.m. It will be open Saturday & Sunday from 9 a.m. to 12:30 p.m. If you require emergency care, please go to the Emergency Department at our KGH site. #ygk Retweeted by Providence Care 2 months ago

Wondering how you can support #healthcare right here in #ygk? Join @rockinreid and @HeyBenMcLean next Thursday, June 25 for a stream-a-thon! Learn more at the link below! 👇🏻 twitter.com/983FLYFM/statu… 2 months ago

Join us Thursday, June 25th for the Stream-A-Thon for UHKF!

All essential visitors and patients coming for outpatient appointments must wear a mask or a face covering for the duration of their visit. Click on the image below to read more. providencecare.thumbs.top/lXdabQQ 2 months ago

Are you interested in learning how to properly wear a face mask? In this video Heather Candon, Director of Infection Prevention & Control at Providence Care and @KingstonHSC, gives some great tips on how to put on and take off a fabric mask. #ygk #staysafe twitter.com/KingstonHSC/st… 2 months ago

Masks / face coverings are required when you visit #myKHSC in #ygk. Learn how to wear a cloth mask properly & safely from our infection prevention & control expert Heather Candon. https://t.co/JDLCRUAfDR #COVID19

While today's #DayofCaring may look a little different, we are proud to recognize this important day in our #community. Today we encourage those in #ygk to come together & support one another in small, meaningful ways. #LocalLove #StaySafe 2 months ago 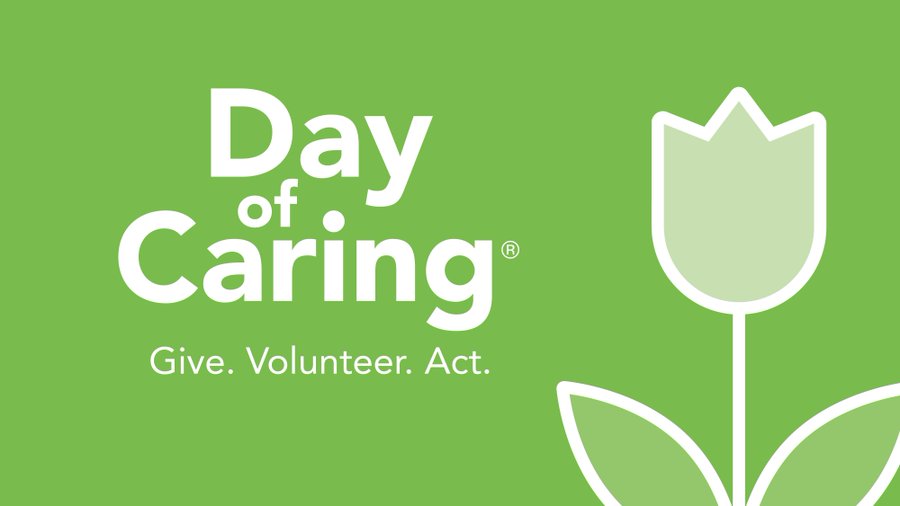